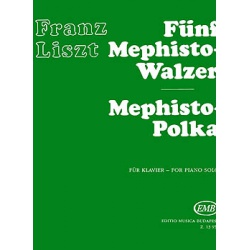 Liszt was inspired, mainly under the influence of Berlioz's Faust compositions, by the Faust, and much later by the Mephisto themes to write several works. In the first period between 1856-62 he wrote the Faust Symphony and Zwei Episoden aus Lenaus Faust which included Night march and Dance in the village tavern - the latter being also entitled First Mephisto waltz - these for orchestra, along with versions for piano two and four hands, and for two pianos written simultaneously. The rest of the Mephisto compositions are all late works from between 1880-85: 2nd Mephisto waltz 1880-18981, 3rd Mephisto waltz and Mephisto polka 1883, 4th Mephisto waltz 1885, 5th Mephisto waltz, subtitled "Bagatelle sans tonalité", probably also 1885. The Five Mephisto waltzes and the Mephisto polka are now published by EMB in one volume (the first such selection world-wide!), as separate edition of the New Liszt Edition, where they appeared in a both critical and practical edition between 1982-84.