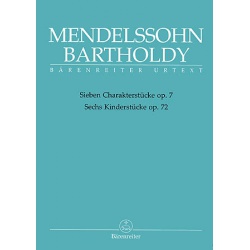 The “ Charakterstücke op. 7” and “ Kinderstücke op. 72” are Mendelssohn’s most popular piano albums besides his “Lieder ohne Worte ” and the “Variations sérieuses op. 54”. Robert Schumann described the character pieces as an “interesting contribution to the development” of the “masterful youth”.

The compositions mostly dating from 1827, are essentially the result of his lessons with Carl Friedrich Zelter in Berlin . The teacher encouraged his pupil to immerse himself in the strict style of old music”, in particular Johann Sebastian Bach, but at the same time, as he himself said, confidently allowed Mendelssohn to dream of “dragons and goblins”.

In the 19th century, learning the piano was regarded as a highly desirable accomplishment. The demand for piano lessons for children led rapidly to the development of a repertoire suitable for this age-group. Albums for children were particularly popular around the mid-19th century and were popular presents for children’s birthdays, Christmas and other occasions.

Mendelssohn’s “ Kinderstücke op. 72” were published in London in 1847, the year of his death, under the title “Christmas Present for His Young Friends”.

The edition contains both piano cycles in the versions published in the first edition, and an extensive appendix also includes variants and early versions which survive in different autograph manuscripts
- Two of Mendelssohn’s famous piano albums, with pieces of easy to medium level of difficulty
- Urtext edition reflecting the latest research findings
- Different versions taken into consideration
- Critical Commentary and detailed foreword (Ger/Eng)